One and a half hours from Lisbon and two hours from Porto, you will find Tomar right in the centre of Portugal. Because of its location, this city is perfect for a weekend getaway or a stop between trips from north to south of the country. It was on one of these trips from the Algarve to the north that we stopped and explored the city. In this post, we’ll let you know the places you can visit in the city, as well as in its surroundings.

The city of the Templars is not very big and you can visit it on foot. Park the car near the entrance of the “Mata dos Sete Montes” National Woodland and start the adventure, climbing up to the Convent of Christ. You can visit the city following the order of the places below.

Convent of Christ is Tomar’s landmark and a must-see in the list of places to visit in the city. A UNESCO World Heritage Site since 1983, it brings together elements of various architectural styles, Romanesque, Gothic, Manueline, Renaissance, Mannerist and Baroque. The ex-libris of the convent is the Chapter House Window, one of the main works of the Manueline style.

The grandeur of the convent and the spectacular nature of the various cloisters is undeniable. However, our experience was not the best.

We left the visit to the convent for the end of the day, when we entered it was still some time before closing and we were still within admissions hours. However, a few minutes later and several minutes before closing time, the staff started closing the doors and informing us that they were closing. We didn’t manage to enjoy the visit as we were rushing around and ended up not visiting all the areas. So, do not leave the visit for the end of the day. Please note that the closing time applies to both the access to the inside of the building and to the gardens.

Another negative aspect is the fact that there is no free parking on site, nor any indication of the average time of the visit. If you choose not to park in the city and choose the convent’s car parks, we suggest you pay for parking for an hour and a half/two hours.

Integrated in the Convent of Christ, you will find Tomar Castle. At the main entrance of the convent, you can see the castle walls. Located high above the city, you have a privileged view over it. The castle is surrounded by gardens where you can stroll or relax in the shade.

After visiting the castle, you will return to the city via the 39-hectare Sete Montes National Forest, which is the city’s main park. Once known as the Cerca do Convento, the forest was used by the Order of Christ as an area for retreats and cultivation.

In the middle of the vegetation, you will find a miniature temple, known as “Charolinha” due to its cylindrical shape.

Just outside the “Mata dos Sete Montes” National Woodland, you’ll find the Convent of S. Francisco, which stands out for its Mannerist chapel. Currently, the convent houses the Museu dos Fósforos (Match Museum), which houses a collection of over 40,000 matchboxes.

On the way to Praça da República, you will find the Synagogue, believed to be the oldest in Portugal and where you can visit the Museu Luso-Hebraico de Abraão Zacuto (Abraham Zacuto Luso- Jewish Museum).

You arrive at the Republic Square in the centre of Tomar. The statue of Gualdim Pais, the city’s founder, stands in the centre of the square as a tribute. You can also see the Church of São João Batista, the parish church and the Town Hall, the former Paços do Concelho building.

The square is complete with impeccably clean and cared for old houses and full of architectural details.

Corredoura, now called Rua Serpa Pinto, is Tomar’s main pedestrian street. It is there that you will find many shops, cafes, restaurants or local accommodation establishments.

Strolling along the cobbled street you will find the Residencial União, which dates back to the 19th century, the centenary Café Paraíso or the confectioner’s shop Estrelas de Tomar, where the famous Fatias de Tomar (Slices of Tomar), Tomar little cheeses and Beija-me Depressa were born.

You’ve reached the place we enjoyed most in the city, the river Nabão and the Mouchão Park. In the park there is no lack of elements as in so many other parks, but this one stands out for its bandstand, the romantic pergola and the Mouchão Wheel. The wheel is cherished by all Tomarenses and few visitors remain indifferent to it. It was built in 1906 to irrigate the fields surrounding the river and to transport water to the mills.

Next to Parque do Mouchão is Ponte Velha, one of the most beautiful entrances to the city. The origin of the bridge is thought to be Roman, but there is no certainty. It is believed that when the Knights Templar arrived in Tomar they took advantage of an existing stone structure and built the bridge to cross the river safely.

At the end of the bridge, on the banks of the river Nabão, you will find the convent of Santa Iria, which, like the bridge, was built on a very old building, which predates the castle. It was here that the martyrdom of Saint Iria took place, beheaded by Britaldo, whose body was thrown into the river. According to the legend, the waters of Tejo opened to show the coffin and, at that place, today a pattern marks the occurrence.

The Levada de Tomar also dates back to the time of the Knights Templar and was created to supply power to the mills and olive oil presses on the banks of the river. Nowadays, it is home to the Levada de Tomar Electricity Plant, which you can visit, learning more about the production of electricity. If you want you can also walk along the banks of the levada on any of its walkways.

Once the visit to the city centre is over, we suggest you end the day at the Pegões Altos Aqueduct. Located very close to the Convent of Christ, the aqueduct is six kilometres long and was used to bring water to the convent.

Climbing the aqueduct is not suitable for people with heart conditions, children or those afraid of heights. If you are not afraid and feel up to it, you can admire the beauty of the aqueduct and the surrounding area from its height of 30 metres. Always be careful because there is no support base and the wind is usually strong. 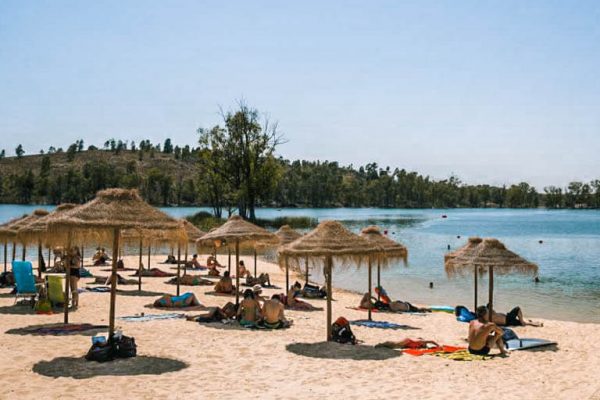