Marrakech is the perfect city to explore all our senses. I visited Marrakech with friends last October. In this post, I bring you our itinerary with the best places to visit and the experiences not to be missed in the red city – name given to Marrakech because all the buildings are red.

It is a special city and it provides memorable experiences. Marrakech is divided in two: the “old” city, called Medina which was built between walls and where you can experience all Moroccan excitement and bustle, and the new city, where you will find the hotels, restaurants, luxury shops and nightclubs, places often visited by celebrities.

The trip lasted five days in total. However, the first and last day were spent travelling by plane, so I chose not to include them in this itinerary.

Read also: Marrakesh – Tips to Have the Best Experience

The places we planned to visit on the first day of the trip were relatively close so we chose to walk all the time. We started the day with a visit to the famous souks, markets that are concentrated in the central area of Medina. There are plenty of streets with endless options in which we are sure to get lost. Bags, carpets, shoes, jewellery, natural perfumes, teas, souvenirs, … In these markets, there is a mixture of colours, patterns, textures, smells and flavours. There’s so much to see that, by the time we realized, the morning had already passed.

After lunch, the afternoon began with a visit to the Palais El Badi. On the way to the palace, we took the opportunity to see and explore the streets of Medina. The Palais El Badi, although it is in ruins, is very imposing. It has huge patios that impress and it is possible to climb a tower where you have a wonderful view of the city. In one of the rooms of the palace, we can see a video telling the history of it and showing how it was before its destruction.

Curiosity: this palace was built to commemorate the victory of the Moroccans against the Portuguese in the battle of Alcácer Quibir.

After this visit, we returned to the streets of Medina towards the Koutoubia Mosque. It is the central mosque of the city and is surrounded by beautiful gardens. As in most mosques in Marrakech, non-Muslims cannot enter and can only visit the outside.

In the meantime, we returned to the riad through the central square of the city – Jemma El Fna. During the day, this square is relatively calm and there is not much going on but at night it is completely transformed… Food stands, women reading the fortune, men doing monkey and snake shows, music groups, improvised games, women doing tattoos, groups dancing… In this square, everything becomes art and something that can be sold. We stayed in the square living everything that was happening and, at the beginning of the night, we returned to the riad to have dinner and rest.

The second day began with a bus ride to the Majorelle Gardens. There are several buses from Jemna El Fna Square to the gardens (L4, L11, L15). The value of the ticket is low, at around 2.00 euros per journey. When we arrived at the garden, there was some queue but we still managed to get in relatively quickly. I advise you to visit in the morning since in the afternoon the gardens have many visitors and it becomes a bit difficult to visit. Nobody likes to visit a crowded place, right? The Majorelle Gardens are beautiful. I highlight the huge variety of plants and the incredible colour mixing. In addition to the gardens, there is also a shop, a cafe and the Berber Museum where works by Yves Saint Laurent and Pierre Bergé are on display, as well as ethnographic pieces of the Berber people.

We returned to the city and we could not resist walking through the souks again. We weren’t there for long because we wanted to rest for a few minutes as an incredible experience was coming – a visit to the desert, a camel ride and dinner with a Moroccan show.

I cannot say that I actually went to the desert because it was not the desert with fine sand and dunes, but an area far from the city with many plateaus “imitating” the desert. A trip to the desert means spending the night at its gates, that is, two days of travel. As our trip lasted only three days, this was the best option to get a smell of what the desert is.

For this experience, we bought an excursion on the riad. We arrived a bit early at the agreed location and the guide offered us a jeep tour of the desert and it was absolutely amazing. We returned to the place where we would ” embark ” on the camel and, after a brief explanation, we started our tour. Initially, I was a bit scared but easily got used to and loved it. This was, without a doubt, the highlight of this trip and I lack the words to describe it… The combination of the desert silence and the sunset was incredible. After the camel ride, we had a typical dinner and a Moroccan style dance show.

The Palais de la Bahia was the place chosen to start the third day of the trip. It is a building full of colourful tiles with incredible patterns. There are still many walls and a lot of floor with the original tiles that enchant everyone. Some areas of the palace are a little destroyed but we can already see some restoration works.

After visiting the palace, we stopped by Fonte Chouf on the way to Medersa Ben Youssef, a local school. We had lunch and, in the early afternoon, visited a garden that is right in the middle of Medina – Le Jardin Secret. The name could not be better chosen because this garden was built right in the middle of Medina in a brilliant way and those on the outside don’t understand what is inside.

After this visit, we went once again to the souks to do some more shopping. Meanwhile, we headed to Jemna El Fna square and climbed up to Le Grand Balcon du Cafe Glacier to watch the sunset. The cafe was completely full but people were coming and going and we quickly got a place in the esplanade. The view from above is beautiful… The sunset between the tower of the Koutoubia Mosque and the garden that surrounds it, the commotion of people setting up their stands in the square, there are a lot of things happening at the same time. The sun went down and we walked down to the square to have dinner and experience what was happening. A few hours later, we returned to the riad.

I returned with a suitcase full of memories of a city that marks for its uniqueness. Sales run in the blood of the Moroccans and they all know how to speak Portuguese, even if only “Cristiano Ronaldo”. I felt all the smells, textures and colours! I experienced a huge cultural difference that turned out to be very positive! Despite the differences, the Moroccans show an acceptance of those who know how to receive tourists even if they are not equal to them.

Just a tip: don’t take photos of the Moroccan people, they really hate it! 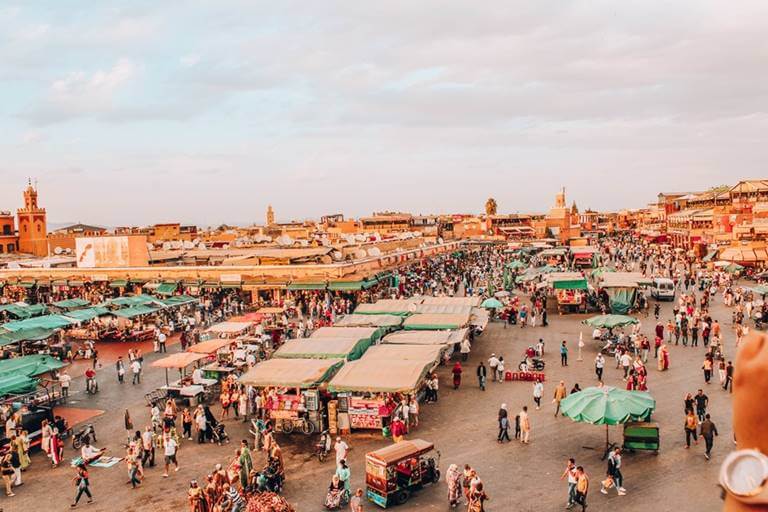